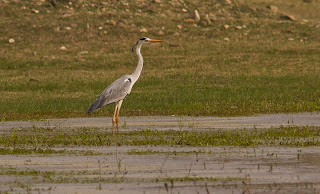 Early spring migrant birds were found to be present in small numbers in East Georgia already on 23rd March 2013. The weather was dull and foggy to start but warmed up later, but with not much sunshine. A single Hobby, one Northern Wheatear, two Isabelline Wheatear and two Lesser Short-toed Larks were around David Gareji. The Skylark, Crested and Calandra Larks were already in full song and display. Several Chukar were calling loudly near the monastery, a safe haven from hunters. Very smart single male Rock bunting, Eastern Stonechat and Black Redstart were there too. Several Chiffchaffs were found, some singing, at a warm spot by the Mkvari River at Pontichala near Tbilisi. And one Hoopoe and 20 Garganey were at Kumisi Lake. White Wagtails were around in small numbers. Winter visitors including Fieldfare and Pintail were still present and passerines such as Linnet, Chaffinch, Goldfinch and Greenfinch were still in small flocks, proving winter is not quite over yet. Other birds including Laughing Dove, Black and Griffon vultures, Great and Little Egret and Pygmy Cormorant made up a very good day out.

By Debby Reynolds
Posted by www.ecotours.ge at 10:03 PM No comments: