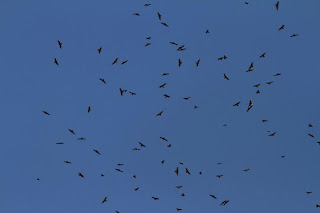 The Batumi bottleneck is one of the most important birdwatching sites in Eastern Europe, where migratory birds concentrate en route to Africa and southern Asia. The bottleneck occurs at the location where the mountains of the Lesser Caucasus, covered with humid relic forests, descend to the Black Sea coast. The density of migrating birds that can be watched from the site is higher than any other place in the Caucasus region. Each fall thousands of birds of prey soaring in thermals migrate through the site. Common Buzzards are the dominant species, but many Black Kites, European Honey-buzzards, Northern, Montagu’s, Pallid and Western Marsh Harriers, Eurasian and Levant Sparrowhawks, Eurasian Hobbies, Common and Lesser Kestrels, Red-footed Falcons, Merlins, Ospreys, Short-toed Snake-eagles, Lesser Spotted Eagles, Greater Spotted Eagles, Imperial Eagles, Steppe Eagles, Booted Eagles, and White-tailed Eagles could be seen as well. Smaller numbers of Northern Goshawks, Peregrine and Saker Falcons, Golden Eagles, and Rough-legged Buzzards are regularly spotted. Other species to watch for include other soaring birds like storks and pelicans as well as a good variety of waterfowl and shorebirds.
Posted by www.ecotours.ge at 10:51 PM 2 comments: